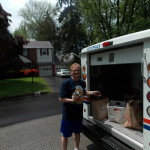 Today is an important day. Today is Memorial Day. Each year we stop to honor those men and women who have served our Nation in the armed forces. Today, we pause to remember those patriots and their families who have sacrificed so much.

Today is the day to say “THANK YOU” to all those soldiers that risked their lives while fighting in Europe, Korea, Southeast Asia and the Middle East. Today, we especially honor those soldiers who lost their lives. Your service will always be appreciated.

This year marks the 50th anniversary of the Vietnam War. The United States lost 58, 000 men and women in that conflict. I attended my first and only military funeral back in 1968. I was 9-years old. My first cousin, who was a Marine, was killed at age 19, in Quang Tre Province (Vietnam). Posthumously, he received the Bronze Medal and Silver Star for “Gallantry in Action.” I think about him often,     but especially today. May you rest in peace Vinnie, knowing that you did everything you could for your country and for your men.

Some may not know that Philadelphia has the dubious distinction of having two high schools that lost more men in Vietnam than any other high schools in the entire United States.  Those two schools are Edison High and Father Judge.  On this day, I ask you to keep these soldiers and their families in your prayers.  Remember, the sacrifice they made for each and every one of us.