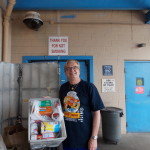 Dr. Martin Luther King was the leader of the civil rights movement. The movement wanted change. It demanded civil rights for African Americans equal to those in the majority power.  The struggle sought to attain equal opportunity in employment, housing, and education, as well as the right to vote, the right of equal access to public facilities, and the right to be free of racial discrimination. It was about ending the bigotry and prejudice toward African Americans. It was about human rights. It was about citizenship.

I write this article not as an expert with regard to the civil rights movement. There are plenty of those who are far more qualified than me to discuss the actual historical events leading up to the passing of the 1964 Civil Rights Act.  In fact, when the law was enacted, I was just five years old.  Rather, I write this article as an expression of my respect and admiration for the legacy of   Dr. Martin Luther King and his team, who peacefully protested the mistreatment of minorities in this country.  I wanted to pause and reflect on the man that challenged this great country to look at itself and to embrace our first Founding Principle which states; “We hold these truths to be self-evident, that all men are created equal, that they are endowed by their Creator with certain unalienable Rights, that among these are Life, Liberty, and the pursuit of Happiness.”

To say that the civil rights movement impacted the lives of African Americans alone, would describe too narrow of an understanding of its effectiveness. It was much more than that.  In fact, the movement prompted gains not only for African Americans but also for women, persons with disabilities, and many others.

In celebrating the Martin Luther King holiday, I want everyone to know that it was organized labor, early in the conversation, and despite severe opposition, promoted and pushed for the MLK holiday in their contract negotiations. I am proud, as a union member, to know that organized labor was one of the first groups to publically support the King Center in their quest to make the third Monday in January, a federal holiday, honoring and celebrating such a humble man, Dr. Martin Luther King.