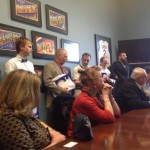 Happy New Year!! I want to thank everybody for their efforts in 2014, however, no postal reform was passed in 2014.  Therefore, we have to start the conversation over again in 2015.  We were able to maintain Six Day Delivery in the 2015 fiscal year.

That’s the good news, we were also able to keep out some bad appropriations.  Postmaster General Donohue however, moved forward

with plant closings.  They affect the timely delivery of mail and the placement of workers, not a sensible solution.

There is a change in committee assignments.  Representative Jason Chaffe (R-UT.) will take Darrell Issa’s position.  He indicated that he wants a better relationship then what we had with Issa.  We’ll See?  Senator Ron Johnson (R-WI.) will replace Tom Carper as Chairman of Homeland Security.  Johnson is not a friend of the NALC, so the battle will continue.  Our best asset is us, the Letter Carriers of the United States.  Be professional and get the word out that the USPS is not broke, we just need a sensible Postal Reform Bill.

H.R. 12 is a new House Resolution that was just introduced and asks for the continuation of six day delivery.  So far, Chaka Fattah is the first local Representative to cosponor.  Call your Rep. now and ask them to sign on to this Resolution.

If you are not an E-Activist please sign up and give to COLCPE.