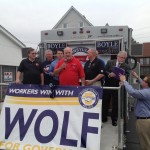 Merry Christmas, Happy New Year and a Happy Holiday season; 2014 is soon to end and it was a tough year for us. However, there IS some good news. We’ve converted many CCA’s in the city as well as in our Associate Offices, 75 or so in the city and approximately 15 more in the AO’s. That’s close to a hundred CCA’s converted, who had no chance of becoming career employees in the old system of PTF’s and Transitional carriers. That’s a good thing. We had agreement on CDRAAP, which is the new process for evaluating routes. That’s a good thing because we won’t have to go through a full blown Count and Inspection to get our routes evaluated, which no one likes. The Parcels are a good thing, I know we’re getting killed with them, but it’s BILLIONS in revenue and we need that, so it’s a good thing. The pay checks with the Overtime we’re working are a good thing too. Although you hardly have any time to enjoy it, the bills are paid and that’s always a good thing. In addition to that, the abundance of parcels is making it possible to get some new positions, truck positions. Six are planned and three are going to be bid in January. New positions are always a good thing. The best thing however, is that we’re still hanging in there, the Postal Service that is, we’re healthy, our families are good and we’re looking forward to a better year than last. So, have a Happy New Year and let’s keep moving forward.