The Philadelphia Council AFL–CIO’s 26th annual Tri-State Labor Day Parade and Family Celebration occurred on Monday, September2nd.  NALC Branch members and Officers gathered together at Washington and Delaware Avenues to join in a parade saluting organized labor.  The parade allowed groups of trade unionists an opportunity to openly express not only our solidarity but our appreciation for the achievements of the American worker.

In a symbolic gesture of “Unity”, members from the American Postal Workers Union, Mail Handlers, and the Letter Carriers Union walked shoulder to shoulder as we trekked down Delaware Avenue.  The parade itself stretched for miles upon miles.

Philadelphia is known as a “Union Town” and for good reason. I am proud to be from this city. Being able to march with such an impressive group of people was awesome.  To those that participated, I applaud you. You took the time to pay tribute and show your gratitude for the hard-working rank and file members that helped build this great Nation. You get it!

See you at the next general membership meeting, 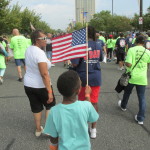