No Time to Sit on the Sidelines. 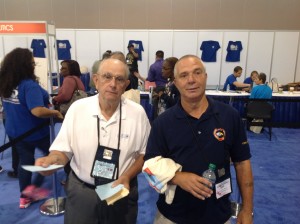 Most important election in our lifetime. We have heard this many times, but I think we can say this is the most important.
The NALC has endorsed Hillary Clinton for president. There is a lot of issues in this campaign, but we believe Hillary Clinton
is the best choice for letter carriers and working people. Secretary Clinton answered our questionnaire about letter carrier
issues (Donald Trump didn’t), she believes in a strong postal service, six-day delivery, collective bargaining, raising the minimum
wage, important issues for workers. Donald Trump hasn’t said much about the post office, but in his economic
plan,

he mentions cutting federal spending, that usually means coming after our pension and health care.
In the Senate race the NALC is endorsing Katie McGinty. I have spoken personally to Katie McGinty and she also believes
in a strong postal service, six day delivery and collective bargaining. Her opponent Pat Toomey does not. He never voted
favorably for a postal bill. He believes in right to work and does not support collective bargaining.
We understand there is a lot of issues but for our jobs there is a clear choice, Hillary Clinton for President and Katie
McGinty for President. Please take your family, friends and neighbors to Vote. Please Vote on November 8. Polls are
open 7am to 8pm. THIS IS THE MOST IMPORTANT ELECTION OF OUR LIFE. VOTE NOVEMBER 8.